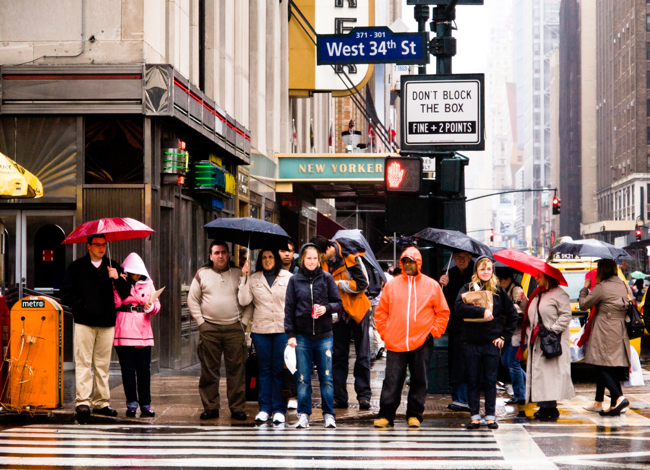 Lately, I’ve been going through my Lightroom folders making sure my catalog categories are up to date and noticed several projects in which I just fell out of photographing. Therefore, the post is dedicated to works left unfinished, and sadly discounted.

First up — The Crosswalk

Photographed roughly five years ago, the purpose of this exercise was to explore how people arrange themselves while waiting to cross the street. The white crosswalk lines as well as nearby signage provided a nice natural frame, and a busy street almost aways provide subjects.

What particularly attracted me to creating these photographs was the variety of colors and faces that  were able to be grouped together in this fashion. By shooting mostly in Manhattan,  the hope was to display the vast amount diversity in this city in a easily accessible place. And for time, it was going well, albeit sporadically between 2011 and 2012, until I stopped.

Sometimes other projects or responsibilities get in the way; in this case it could have been preparing Foot Traffic for a show, but look backing now, perhaps I thought the photographs were too easy, too random. I have been pondering a lot with my work lately about if “quantity can equal quality;” and what I mean is that can a seemingly repetitive series of work produce sensible art? I already did it with Foot Traffic, currently doing so in “Park Sanctuaries” (which part of the objective is to find uniqueness within sameness), so the progression of my work usually usually involves around creating large groupings to define a concept. But with “The Crosswalk”, I felt as though I waiting for subject to come into the frame as I machine gunned photographs through various busy streets with no aspect of control which I believe is critical to creating art.

Some could argue, however, that the mere aspect of deciding to frame these people within the theme of crosswalks is the control necessary of an artist. When I think of projects like these I look at the works of Michael Wolf – Tokyo Compressions or a series of portraits at London Bus stops (can’t find the link but I remember seeing it around 2013), that photographic art can be produced within a simple context along it as it has proper curation to express drama and emotion that fits the mission of the work.

Perhaps I will come back to this project and remove it from the discontinued pile.